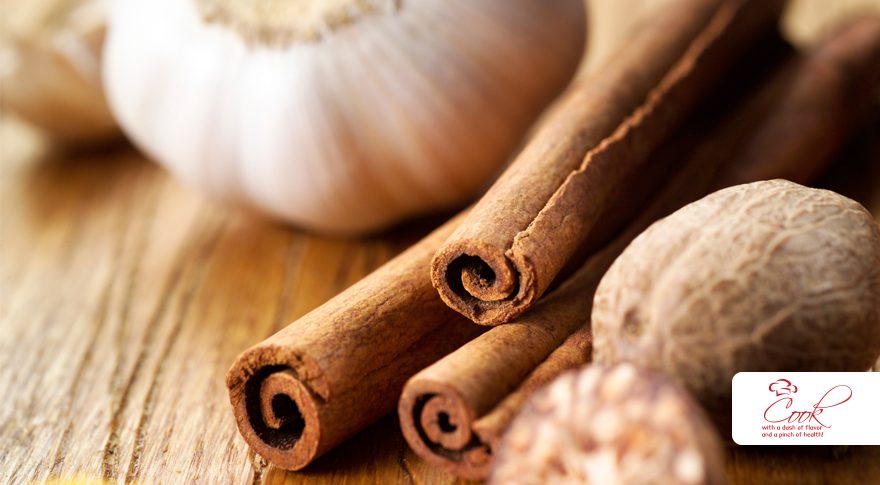 Cinnamon
What do Moroccan couscous, Spanish flan, Mexican hot chocolate and mango chutney have in common? Cinnamon. Known as dalchini in Urdu and Hindi, cinnamon has been used as a spice in both sweet and savory foods for over 4,000 years. It originated in South East Asia and is derived from the bark of the cinnamon tree. Cinnamon can be found in grocery shops and specialty stores around the world in the form of powder, stick (or bark) and oil. This spice is ubiquitous in Asian cultures and cuisines. Popular South Asian dishes including curries, rice and desserts contain cinnamon. It is also a key ingredient in garam masala and traditional chai is infused with a stick of cinnamon. Cinnamon is an easy spice to use and cooks around the world can be creative by reducing the amount of salt and sugar, adding cinnamon instead for flavor.

When using cinnamon spice in daily cooking, it is considered safe up to 6 grams per day (approximately 2 teaspoons in powder form). Suggestions for incorporating cinnamon include

While the culinary uses of cinnamon are well documented, the health benefits of cinnamon are not as widely known. Cinnamon has traditionally been suggested to help with many ailments. For example, oil of cinnamon (or cassia) combined with honey, can help relieve a sore throat. Also, rubbing cinnamon oil onto the temples can ease headaches. Additionally, cinnamon may lower blood glucose, triglycerides and LDL cholesterol in individuals with Type 2 diabetes. Cinnamon may also be known to serve as an anti-inflammatory, antibacterial, antifungal and antioxidant element. It has also been used as supportive treatment in certain cancers and severe viral infections, although there is a lack of medical support for these claims. There is information on the internet regarding the health benefits of cinnamon, but always consult with a medical professional before engaging in self-treatments. Enough scientific studies have not been conducted to back up many medicinal claims, and therefore caution is strongly recommended.

While cinnamon may have health benefits it is not recommended to consume large amounts of cinnamon (more than 2 teaspoons per day), as it can also have adverse side effects. Cinnamon is available as a supplement in tablets or pill form; however, dietary cinnamon supplements are not recommended. Supplements are not monitored by regulatory agencies and therefore, the purity and concentration of the product may be in question. Additionally, cinnamon supplements can interfere with medications, so consult a health care professional before taking any supplements.
Certain individuals must avoid large quantities of cinnamon. These individuals include pregnant women, patients with liver disease, diabetics, hypoglycemic and patients on blood thinners, anti-platelet drugs (such as Plavix), and NSAIDS (such as Motrin, Advil, Naprosyn or Aleve). As long as cinnamon is used in moderation, there are tremendous flavor and possible health benefits. Check out the recipes in this e-book for additional recipe ideas using cinnamon. There are many recipes to try.

Turmeric
Turmeric (Curcuma longa), also known as haldi, is a plant from the ginger family. It is native to South East Asia. Erode, a city in the south Indian state of Tami Nadu, is the world’s largest producer of turmeric. Turmeric plants are gathered for their roots, which can be used fresh, or as a powder. The roots are boiled for several hours and then dried in hot ovens, after which they are ground into a deep orangeyellow powder.

Turmeric is commonly used as a spice in curries in South Asian and Middle Eastern cuisine. It is also used for dyeing and to impart color to mustard and other condiments. Its active ingredient is curcumin; which has a distinctly earthy, slightly bitter, hot peppery flavor and a mustardy smell. In addition to its uses in cooking as a spice, turmeric has also been used for medicinal purposes over the decades. “Haldi milk” is a common traditional treatment for colds and throat aches, and a paste made with haldi is also traditionally used for sprains and acne. In Ayurvedic practices, turmeric has been used as an antiinflammatory agent and remedy for gastrointestinal discomfort associated with irritable bowel syndrome and other digestive disorders. Raw turmeric is said to strengthen cartilage and bone structure. Some people use turmeric in skin creams as an antiseptic agent for cuts, burns and bruise. Turmeric paste is often used by Indian women to keep skin glowing and free of superfluous hair. Turmeric paste also improves the skin as an anti-aging agent. Turmeric is even used in the formulation of some sunscreens. It is also popular as a tea in Japan.

Turmeric has been researched more recently as a cure for numerous ailments and though there is no concrete evidence, it has been suggested to help with many diseases. Possible Health Benefits of Turmeric

Turmeric should be used primarily as a spice in cooking. The amounts of turmeric found in foods are considered safe. Supplemental forms are also available as capsules containing powder or fluid extract of turmeric. Caution should be used when using supplements due to the possible side effects and drug interactions.

Garlic
Garlic, also known as lahsun, lasan or seer (Persian) is a culinary spice, which has been traditionally associated with numerous health benefits. While fresh garlic cloves or garlic paste is most commonly used in cooking, garlic is also used in dehydrated and powdered form. Also, garlic oils and tablets are commonly used as a supplement. Studies suggest that garlic may help to lower blood pressure and cholesterol (total cholesterol and LDL), thereby possibly reducing the risk of future heart attacks and improving circulation. Other benefits of garlic include lowering the risk of cancer (gastric and colorectal cancer) and also being used as a topical agent in the treatment of warts and corns. Enjoy garlic in your daily cooking to add lots of flavor while also obtaining these possible health benefits.

The World Health Organization (WHO) recommends that adults consume 2 to 5 g. of fresh garlic everyday (approximately one clove). This is equal to about 0.4 to 1.2 g. of dried garlic powder, 2 to 5 mg. of garlic oil, or 300 to 1,000 mg. of garlic extract. Possible side effects of garlic include:

Be sure to use fresh garlic in all your cooking but remember that in China it is called the “stinking rose.” Talk to your healthcare provider before taking large quantity of garlic, particularly if you have certain illnesses or are on certain medications as mentioned above, to avoid potential food medication interaction. 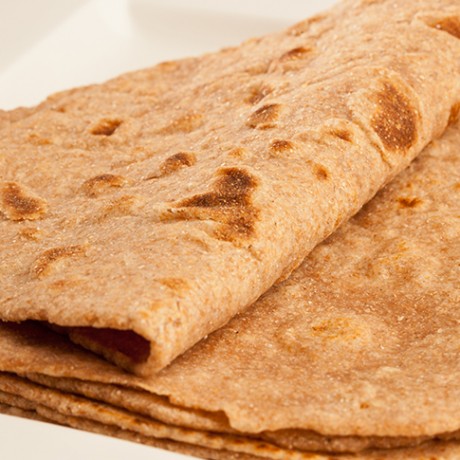 Whole Wheat Chappati
August 6, 2017
Have you wondered how to eat chappati in a healthy… 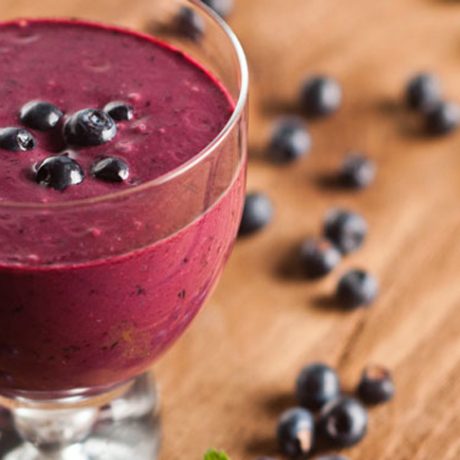 Introduction to Smoothies
December 13, 2015
For many of us it may be difficult to consume… 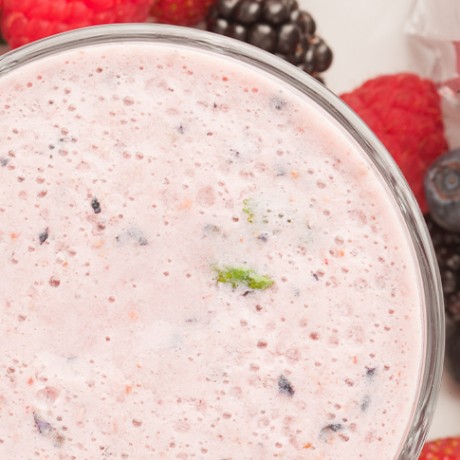 Turning Your Smoothie into Supper
December 10, 2015
The popularity of making home-made smoothies and juices is at… 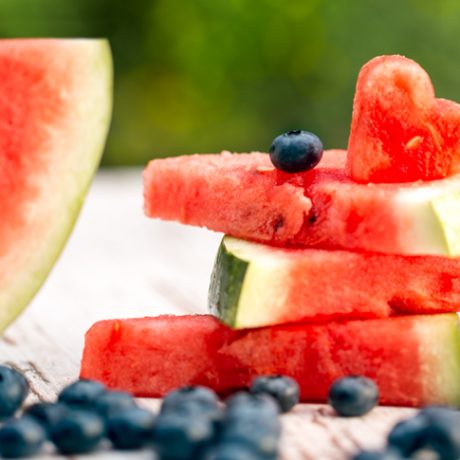 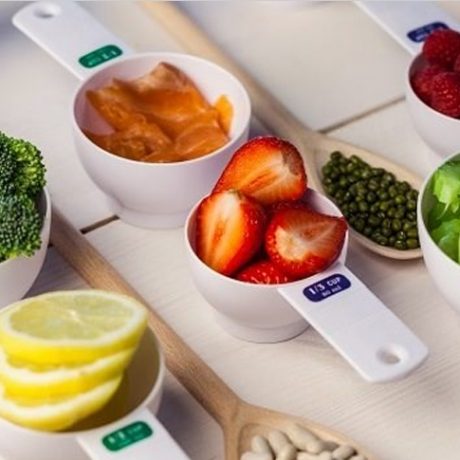 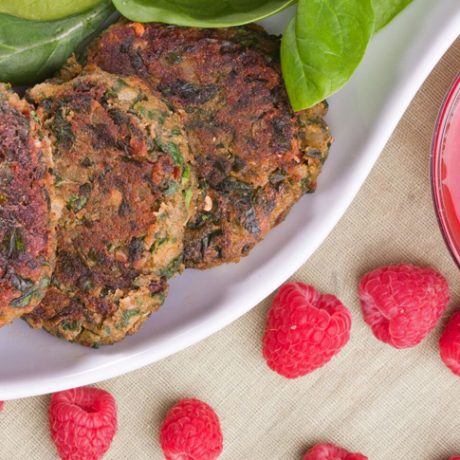 Introduction to Accompaniments
July 17, 2013
This section showcases a number of unique and exotic condiments,…
117 Recipes
Copyright © 2022. Aga Khan Health Board for the United States of America. All rights reserved.
Log InLost Password